Fenalår: Better Than Prosciutto If You Like Lamb (I Do) 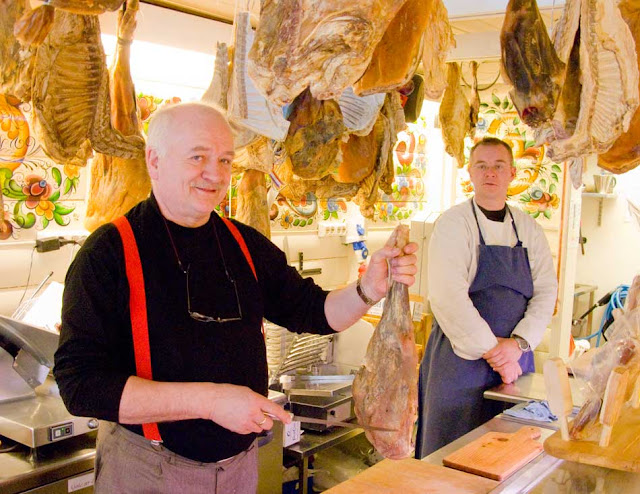 Writing about the supermarkets reminds me of a food stop I made in Oslo to a small shop near Radhuset: Fenaknoken.

The shop, which I discovered on our long weekend in Oslo in March 2009, is owned and operated by a father-son team, Gudbrand and Eirik Bræk (the photo was taken during that visit). 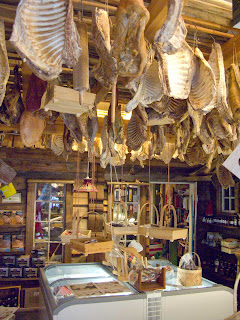 Upon entering, the nose is suddenly aware that this is a temple to cured meats: the odor of salted, cured and smoked fat and protein lets one know that this is not a store for the faint of heart. Hanging from the rafters are scores of meat parts, primarily lamb and pork ribs, and lamb legs. Gudbrand is quick to offer tastes, even to the casual shopper who insist he’s “just looking”. Ask where the meat you tasted comes from, and he lifts up an entire cured leg of lamb, with the shank pointed upwards. This, he says, is Norway. (And a leg of lamb does follow the contours of this Scandinavian land.

The Braek’s are proud to offer what they consider the best of artisinal cured meats to be found in Norway. Although they do not do their own curing, Eirik cooks fresh meats, including carbonnade (basically, meat loaf) and roast reindeer, which is as rosy and flavorful is a good roast beef. When I stopped by during our Oslo visit this year Gudbrand offered a taste of smoked whale: not high on my list, but it would be an interesting addition to any charcuterie plate.

But it’s the salamis (I tasted a goat salami), sausages (pølse), and cured meats that star. Just as on my previous visit, I walked out of the store with some fenalår, cured lamb leg served boneless and thinly sliced, a sort of lamb prosciutto, only slightly drier and smokier. It’s meant for out of hand eating, or perhaps over a single thin slice of hearty bread. A 50-gram purchase set me back 38 kroner, or about $6 for a little less than two ounces, or roughly $50/pound.

Fenalår can be found in any supermarket, pre-packaged and vacuum sealed. It's pretty good, too. But what the Bræk's offer is a superior product and not much more expensive that the version found at the Mega Coop.

Gudbrand also showed me a split smoked sheep head (the skull and meat, not brains or eyes), asking what I thought it was. My first guess, because of the indentations, was split beef heart. There’s not much to eat on it; an entire split head will serve two, he said.

Here's a lunch I made during our Lofoten stay from fenalår and reindeer salami purchased from Fenaknoken: 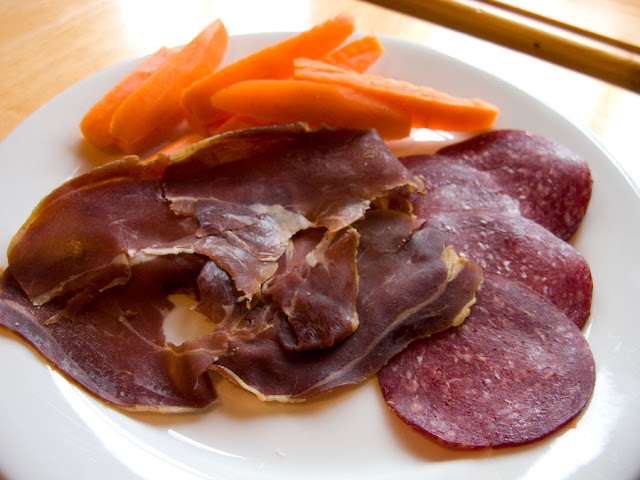