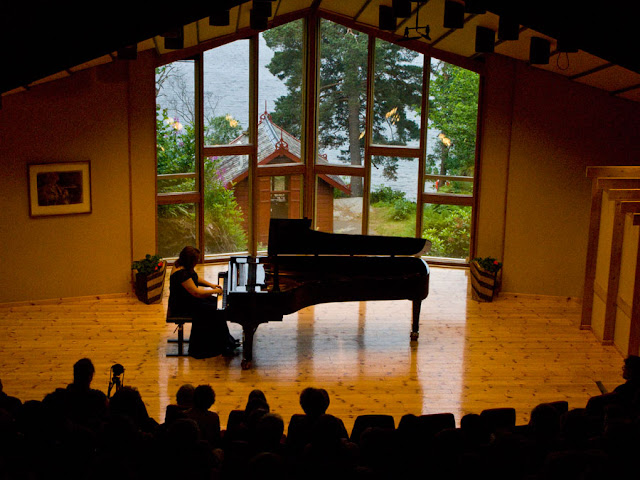 Besides the remnants of Hanseatic traders Bergen's greatest claim to fame is that it was the home of composer Edvard Grieg. Though trained in and aspiring to the German tradition his music is clearly associated with Norway. There was even a Broadway musical in the 1940s based on his music, inexplicably titled Song of Norway.

You probably known at least some of his music, including selections from Peer Gynt Suite, especially Hall of the Mountain Kings.

On our previous trip to Bergen we obtained tickets to the Bergen Symphony Orchestra playing in central Bergen's large concert venue, Grieghallen. That program, however, did not include any Grieg compositions (it did feature a Shostakovich cello concert played by Michael Sanderling with the orchestra conducted by his father, Kurt.)

I rectified the lack of Grieg music from the previous trip by booking tickets for a recital at Troldhaugen, Grieg's home on a hill overlooking the water just outside the city. A 10-minute bus ride and five-minute walk from the parking area led to Troldhaugen's museum, the recital hall, and home. 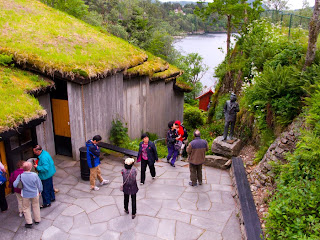 The relatively new recital hall offered fine acoustics and clear sight lines, seating only a couple hundred music lovers. The tiered seating takes advantage of the hilltop location, with the large window behind the stage opening to the water and, at the edge of the hill, the small red cabin in which Grieg did much of his work. The roof of the hall is sod-covered, like many of the small outbuilding and homes you find in rural Norway.

At the Sunday evening program I attended (July 4) pianist Sandra Mogensen interposed pieces by Grieg and Ravel to mixed success. Some of the juxtapositions worked, others did not. But her mastery of the material and the instrument was evident, and even those combinations that did not work held interest.

Grieg's house, built in the 1880s, includes a grand piano in the parlor, which is occasionally used for very special recitals (with hard to get tickets). I commend to you Leif Ove Andsnes's records of Grieg's lyric pieces made in this room on this piano.
Posted by Bob Libkind at 1:55 AM