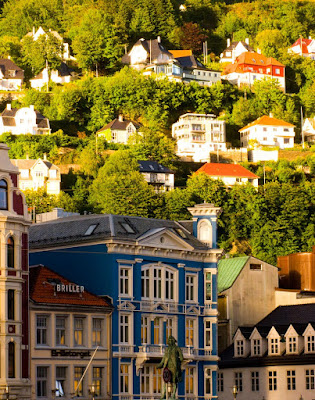 Bergen is a city by the sea. It traces its modern beginnings to the Hanseatic  traders from Germany who established a center for the export of furs, timber and fish to the rest of northern Europe. Many of their warehouses and residences remain standing today along Brygge, the Norwegian word for pier or wharf. (Just like Aker Brygge in Oslo.)

The Hanseatic structures are responsible for Bergen's categorization as a World Heritage Site. We skipped touring that area on this trip because we covered the area 15 years go on a private tour conducted by Jean Sue's friend Tønnes Bekker-Nielsen, who was teaching once a month at the University of Bergen when he wasn't at his regular post at the University of Aarhus in Denmark.

It should be no surprise that the local brew is Hansa beer.

It is also renowned for its fish soup. In most places, fish soup is a simple affair. Combine fish stock with milk and/or cream, sweat some onions and maybe carrots and/or celery and add them to the broth, maybe some potatoes, and finish by adding fish. Not so in Bergen, at least among the purists. The ingredients are the same for Bergen's fish soup, but everything from the selection of the proper fish to its cooking and serving can become an involved ritual. Just read Alan Davidson's account in his classic North Atlantic Seafood.
Posted by Bob Libkind at 11:33 PM