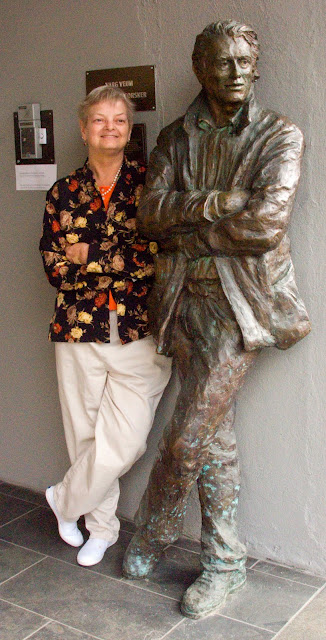 No discussion of Bergen can be concluded with at least a fleeting mention of Varg Veum.

Varg Veum is Norway's Philip Marlowe, the creation of Gunnar Staalesen, one of the current crop of Scandinavian mystery writers drawing attention. Veum's office is located on Strandkien in Bergen; indeed, his address is the same as our Bergen Hotel, the Strand. His statue reposes in front of the entrance where many visitors (including Jean Sue) repose also. And Veum drinks his favorite aquavit, Simers Taffel, at the hotel's bar, Femte I Andre, where I enjoyed the same quaff.

The bar's name is a bit of a word play, the Norwegian version of Abbott and Costello's Who's On First. When we first stayed at the hotel 15 years ago it was located on the fifth floor. With The Strand's remodeling, the bar is now on the second floor. In translation the bar's name would be Fifth on Second. The bar includes a fake door marked as the office of Varg Veum.

Veum's detective exploits frequently center around children, since before taking up private eyeing he was a child welfare worker. (He was asked to leave because he was too inquisitive in investigating the causes of his charges' situations.) Only two of the novels in the series are available in English translation (list them here), and they are hard to come by; I ordered one in advance of the trip from amazon.uk, and purchased another at the Norli bookstore chain in Norway.

We learned about Veum last fall through the International Mysteries series broadcast by one of the minor public television stations in Philadelphia, WYBE. (The series is distributed by mHz Worldview network and also includes films featuring Sweden's Wallendar, France's Maigret, as well as detectives from Germny and Italy. This past week the only four Veum films made have been rebroadcast at 9 p.m.; tonight it's The Woman in the Refrigerator).
Posted by Bob Libkind at 7:25 PM