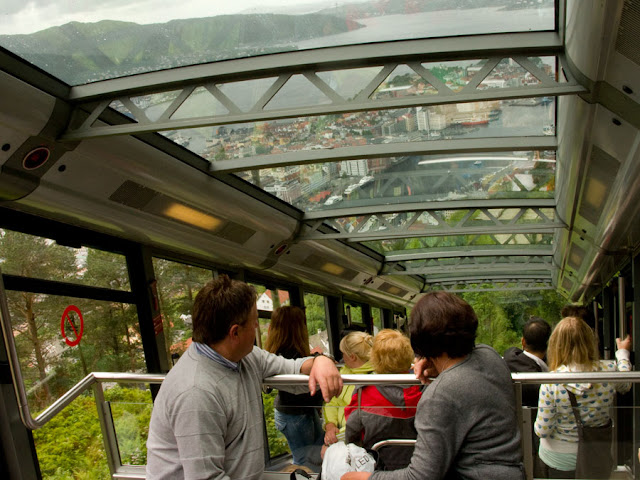 Fløybahnen, Bergen's funicular railway, is both a tourist attraction and means of commutation.

The paired cars (the red one goes up while the blue one comes down, and vice versa) traverse the 1,050-foot Mount Fløyen where nature trails, picnic tables and a restaurant await.The view, when weather permits, is wide and wonderful: all of central Bergen, the university district, Bergen's harbors, the hills, the inlets and nearby islands. Even in cloudy weather (so long as the clouds don't descend to the top of Fløyen) the view is worth the round trip.

The cars make three or four intermediate stops for commuters, since the hills surrounding central Bergen are residential zones. Like all funicular railways, the cars are paired, with the weight of each one providing balance on the funicular. Therefore, the intermediate stops are also paired: when the red car stops for passengers at the second station from the bottom, the blue car stops  at a station from the top. A sign along the wayside warns downhill travelers not to disembark when the first stop is made: when the car going uphill stops at the first intermediate tation, there's no corresponding station in the downhill direction.

The Fløybahnen is now on its fourth set of cars since it went into operation in 1918. The first generation lasted from the funicular's opening until 1954; the second generation cars from then until 1974; the third set until 1994 when the current set went into service.
Posted by Bob Libkind at 1:29 AM