It's only taken a year and a half, but I've finally posted the last four entries to the blog of our month-long Norwegian journey in 2010.

As always, click on an image to enlarge it.
Posted by Bob Libkind at 5:48 PM No comments:

We arrived in Trondheim -- home to one of Norway's great universities, the most northerly Gothic cathedral in the world where the nation's coronations are held, and a shop that sells both chocolate and cigars -- after a three and one-half hour drive from Kristiansund, though at times it seemed longer, broken up by only one ferry.

Nidaros Cathedral is the the major tourist draw of Trondheim, Norway's third largest city. Although construction started in 1070 (not all that long after the Vikings gave up their heathen gods for Christianity), fires destroyed it and the oldest parts still standing date to about 100 years later. Like all great Gothic cathedrals it is an impressive and imposing structure. Most impressive of all were the stone sculptures adorning much of the facade. Because it is build over the grave of Norway's Patron saint, Olav, it was the destination of pilgrims until the reformation. Norway's crown jewels are also displayed on the grounds of the cathedral. 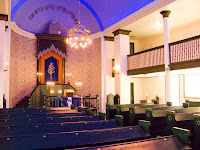 Just across the street from the cathedral grounds is Trondheim's Jewish Museum, where we saw displays recounting the history of the city's Jewish community. The building, which serves as the Jewish Community Center, includes a classic synagogue, the world's most northerly (lots of things are the most northerly in Norway).

A block or two closer to the center of town from the cathedral is Stiftsgården, where the Norwegian the royal family resides when in Trondheim. While elegant and large, it hardly fits the image of a royal palace, especially due to its wood construction

Central Trondheim offers a pedestrian mall shopping area (and, of course, and enclosed mall). At a kitchenware store, Bob found art glasses which are from the Ritzenhof series of milk, shot and beer he collects. Nearby was another store where he bought some artisinal chocolates for Jean Sue, and then noticed they also sold cigars. What a combination!

Bob took his Cohiba Siglo VI (Cuban) to Norsk Aquavit No. 1 Bar, part of the Karl Johan restaurant. The bar only serves Norwegian made aquavits, and Bob's only regret was that with just a few days in Trondheim he couldn't make a dent in tasting them. They also serve Aquavit's natural accompaniment: many different herrings!

After two full days in Trondheim, we boarded the express train from Trondheim to Oslo, an eight-hour journey, but easier than trying to get to the airport. Instead of remaining on the train until it reached downtown Oslo, we detrained at the Oslo airport station, where we could check our heavier bags, then take a quick bus ride to our nearby hotel. That made getting to our flight back to Philadelphia the next morning much easier. 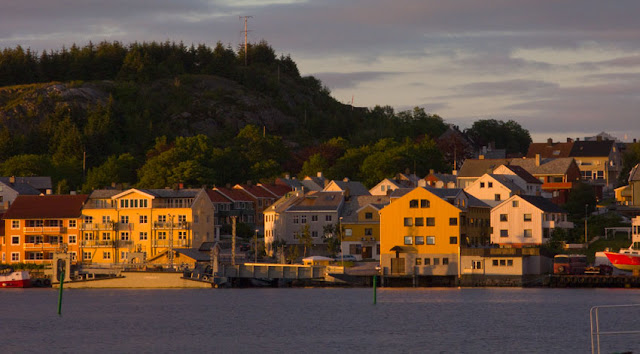 Kristiansund is a rather new town, at least its buildings are since it was pretty much bombed out by the Germans in World War II.

We stayed only one night, but had trouble finding our hotel. Bob thought the hotel must be located near the wharf where the Hurtigruten docks. Wrong. Instead was located across the harbor on another of the three main islands that make up Kristiansund. After a quick call to the hotel for directions we found the hotel, crossing another graceful bridge.

Before the bridge you had to use the Sunbåt, the ferry service which Kristiansunders boast was the first mechanized public transport in the world. I'm not sure about that, and the fact that it stopped running at 4:30 p.m. on a Saturday meant I couldn't partake in the nightlife, such as it is, of central Kristiansund. Instead I settled for a delicious sunset, along with another cigar.
Posted by Bob Libkind at 4:30 PM No comments:

Bridges, Tunnels and Ferries
You can't get there from here unless you take the ferry.

On our trip from Bergen to Trondheim via Loen, Ålesund, and Kristiansund we took no fewer than five ferries as part of our designated highway route. Some were as a short as 10 minutes, one was almost an hour.When you travel in fjord country it is difficult to avoid the ferries, despite the hundreds of billions of oil kroners invested in bridges and tunnels.

The ferries, particularly the ones that operate as the water link of major highways, offer frequent service, sometimes every 10 minutes. All offer seating in salons, and those that take 15 or 20 minutes to make their crossing have food service; on our ferry into Molde, even though it was only a 20 minute crossing, many passengers formed a long queue for food and beverages.

One of our ferry trips could have been avoided, but the 50-minute sailing up the Gerainger fjord to the town of the same name boasts dramatic scenery. As Jean Sue remarked, "Now THIS is a fjord!"

Although Norway has long been a bridge and tunnel building nation, it went on a spree with some of the proceeds from the oil boom. That investment turned the island of Radøy, from whence Jean Sue's family hails, into a long commute from Bergen rather than a six-hour bus-ferry-bus-ferry journey.

Before entering just about any tunnel there will be a sign announcing the mountain or waterway it burrows under, the width of the tube, the length of the tunnel, and the frequency to tune to for Norwegian state radio's primary program. Even the mile-long long Napp tunnel between two of the Lofoten islands featured radio and cellphone service. Tunnels of all but the shortest length include emergency turnouts (some are large enough for buses) and frequently spaced emergency phones and fire-fighting stations.

One of the engineering feats of which Norwegians are proudest is the Atlantic Road, a series of causeways and graceful bridges south of Kristiansund. We purposely routed on trip over this scenic route after learning of it. If you're in the neighborhood it is certainly worth a small detour, but we were not as impressed as we thought we would be. Must have been the anticipation.

Posted by Bob Libkind at 4:04 PM No comments:

Ålesund may have built around fish, but these days its claim to fame is that it burned down in 1904 (check) and was rebuilt in pastel.

There's a definite Art Nouveau feel to this burg, with the old fish houses (where the cod was shorn of its liver for oil, and, after drying elsewhere, packed for export) cleaned up and painted in pleasing pastel hues.   In addition to the old fish houses, many of the buildings within the center of the city were erected after the fire in Art Nouveau style. The distinct roof lines, varied window shapes, trim decorations and painting, doors and turrets all are in accordance with the style of the day.

\We stayed two nights in Ålesund, which gave us a full day in the city. Jean Sue and I split in the morning to go to the museums which interested each of us the most.

Jean Sue headed to the Art Nouveau and Kube museums, the first dedicated to the century-old art form, the second to modern art. The Art Nouveau museum featured an original Gustav Klimpt; the building itself was the former Swan Pharmacy (the family lived on the second floor); the wallpaper and woodwork, including staircase, were astounding, the style a forerunner to the Arts and Crafts movement.

While Jean Sue was going for the arts, Bob headed to the fish, i.e., the Fisheries Museum. Housed in a former fish house on the water, the dark interior told the full story of the Ålesund fish industry with artifacts and multi-media displays. What most impressed was the ambient sound incorported into each area of the museum. Bob was also impressed with a short film depicting the herring industry in the immediate post-war years, and the simulator of the captain's chair and bridge of an ultra-modern vessel. It looked like the bridge from the Starship Enterprise.

Our hotel was located on a pedestrian mall in the heart of Ålesund. Both nights we ate at a neighboring restaurant, Hammar og Kanari. Since bacalao (dried cod, which, depending upon exactly how it is preserved, is called either Stokfisk or Klippfisk in Norway) is one of the pillars of the town's historic economy, Bob tried it one night. Good flavor, but very, very firm -- the salting/drying process, even after proper freshwater reconstitution, produces a flesh that is meat-like. To his taste, it was even tough.
Posted by Bob Libkind at 3:13 PM No comments: 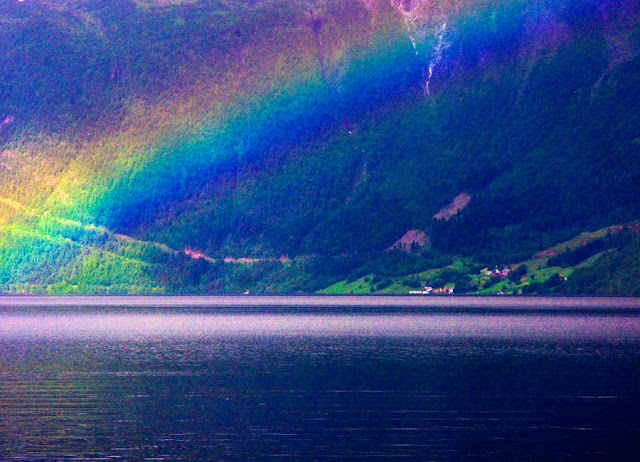 After overnighting in Loen Wednesday night, we had as our destination Ålesund, via the Hellsylt-Gerainger ferry.

Shortly after leaving Loen we spied a good omen for our journey: the rainbow, here only moderately enhanced for viewing by Photoshop. 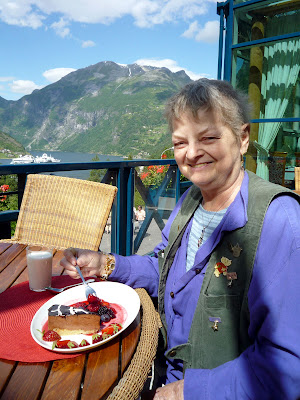 Other than its setting at the head of the Geiranger fjord, the little village of Geiranger has little to offer. It is mostly a dense conglomeration of tourist-related businesses, from glacier bus tours to kayak outfitters. We did, however, have a nice lunch halfway up the nearby mountain at the luxe Hotel Union; the prices were no more than you'd pay at a lesser establishment. My open faced shrimp sandwich was excellent, the side order of french fries crisp and not greasy (though fried in an unknown oil). Jean Sue to an exquisite chocolate cake, which had very little cake but lots of creamy, frothy chocolate filling.

The journey from Geiranger to Ålesund required us to first ascend the Eagle Road, a series of 11 switchbacks from sea level to where the Eagles fly. Lots of turnouts for gawking along the way.

Half an hour out of Ålesund it was time to board another ferry, then onward to our next stop.

Herewith, some additional photos from the day's scenic journey: 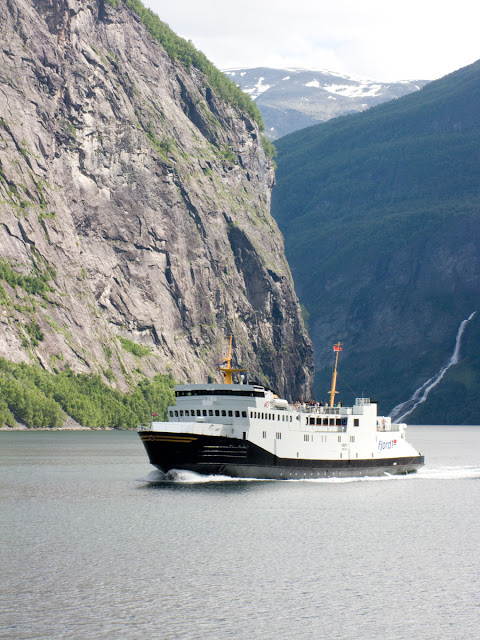 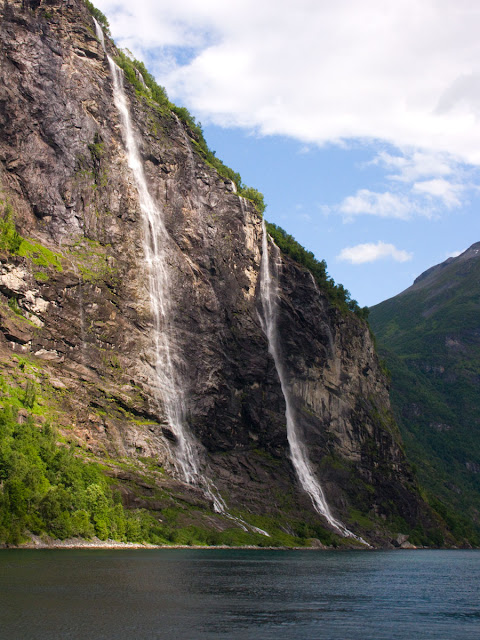 Waterfall into the Gerainger Fjord 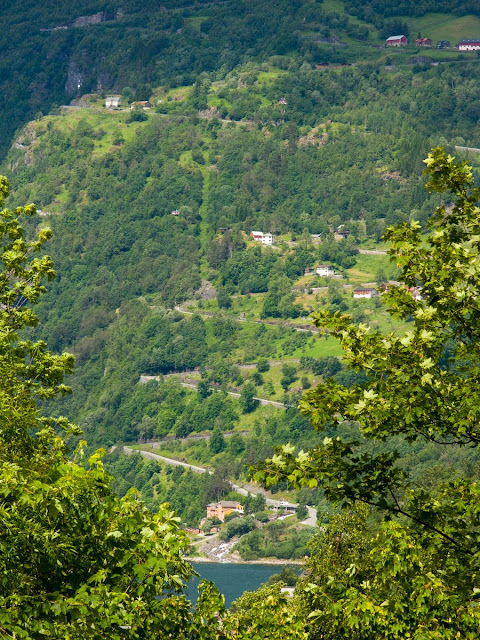 The lower switchbacks of the Eagle Road wind their way up. 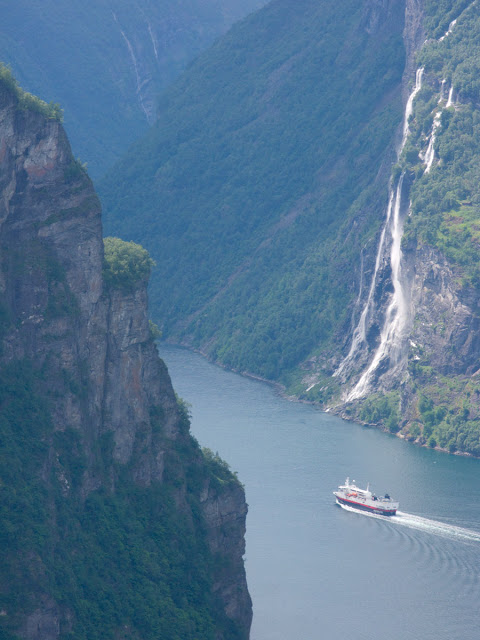 A Hurtigruten makes its way on the northward sail to Kirkenes from Geiranger.
Posted by Bob Libkind at 8:33 PM No comments:

Onward In Our Rental Car 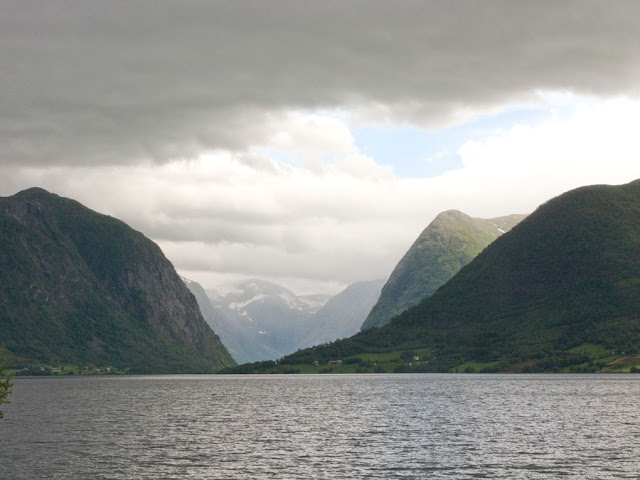 By mid-morning Wednesday (July 7) we had picked up our rental car, a VW Golf hatchback, and were off on the last leg of our trip, a grand tour of Norway's West Coast via Loen, Gerainger, Alesund, Molde, Kristiansund and Trondheim. 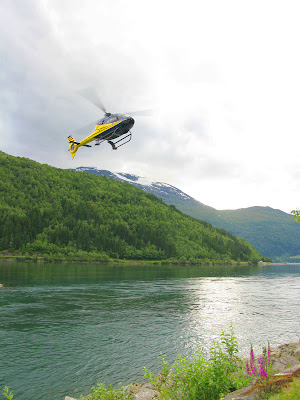 First stop: Loen, where glacier melt-off comes tumbling down the mountains to sea level into Innvik Fjord. The Loenfjord Hotel is locate precisely where the last rapids meet the fjord, and there are plenty of benches from which to contemplate the effect of gravity upon water. Most of the water is melt from Jostedalbreen, Europe's largest glacier just a few miles inland (a distant view of one of the glacier's arms is seen in this view above from the village of Jølster en route to Loen). If you don't want to bother with a winding car or bus trip you could take a quick helicopter tour. One left every 15 minutes or so from the hotel's lawn.

Our one-night stay at the Loenfjord Hotel was marked by lots of celebration among a couple of tour buses worth of Spanish visitors. They crowded into the bar to watch the Spain beat Germany, 1-0, on a header in the 74th minute. Given that celebration, it's hard to imagine the festivities the following Sunday when Spain beat the Netherlands for the cup.
Posted by Bob Libkind at 8:02 PM No comments: